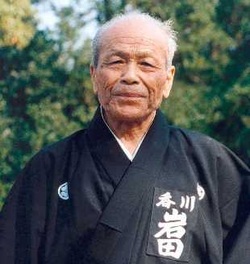 Iwata Norikazu-sensei
Iwata Norikazu-sensei was the man who trained Miki-sensei. A scholar and master calligrapher, as well as a formidable martial artist, Iwata-sensei made his mark on iaido in a career than ran from the 1940s until his death on New Year's Day, 2011.

Iwata-sensei preserved a system that was promulgated by Oe Masamichi-sensei, the 17th soke (master) of the Eishin Ryu system of swordsmanship. This system had existed for over 300 years in various forms when Oe-sensei was born in the Tosa region of Japan in 1852. Oe-sensei was raised among the last active samurai and was involved as a boy in one of the final sword-armed conflicts in Japan, the Clam Gate War of 1864.  Oe-sensei left his stamp on the art by taking over 150 disparate techniques and concentrating them into 45 waza, or forms. Oe-sensei then taught these techniques to numerous students from the Tosa region and these became the fundamental forms of modern Muso Jikiden Eishin Ryu iaido. Oe-sensei is considered by many to be the most direct link to the more practical and combat-oriented methods of pre-Meiji swordsmanship and his students were renowned for their martial skills.

Iwata-sensei was a pupil of four of Oe-sensei’s direct students, Fukui Harumasa, Taoka Den, Yamamoto Takuji, and Mori Shigeki. Iwata-sensei had trained in other forms of swordsmanship but abandoned them when he encountered the methods transmitted by Oe-sensei. He was rejected from the dojos in Tosa at first because he was not from the region, but he persisted and was eventually accepted for training. He trained diligently for many years, developing his skills in this specific method of iaido, eventually known as the Roshukai (“Roshu” is Oe-sensei's calligraphy name).

​In addition to his physical prowess, Iwata-sensei produced many scholarly treatises on swordsmanship and wrote several books on iaido (one such book includes a 32 page description of a single technique). At the time of his death in 2011, Iwata-sensei was the 19th generation menkyo kaiden of Muso Jikiden Eishin Ryu, famed for his strong technique, thorough knowledge of iaido, and skills as a teacher. In his latter years, he began spreading this style to students outside of Japan and traveled abroad to teach, and invited many foreign students to Japan to learn from him.

Iwata-sensei’s legacy is the preservation of an older, more combat-oriented form of swordsmanship than is seen in most modern iaido. He embraced what he was taught by Oe-sensei’s direct students and strove not to water down those techniques for the modern day. Miki-sensei was one of Iwata-sensei’s direct students and he has been charged with teaching American students this old-school form of iaido. Iwata–sensei presented Miki-sensei with the official name of his school for the United States: the America Tosa Jikiden Shigetsukai (アメリカ土佐直傳士月会). This translates roughly as "the American Shigetsu School of Tosa Style Jikiden Iaido" where Shigetsu is Iwata-sensei's calligraphy name, much as Roshu is Oe-sensei's calligraphy name. Thus, our school is the "American Iwata School of Tosa Style Jikiden Iaido".

These are the obverse and reverse of the wooden plaque Iwata-sensei presented to Miki-sensei when he authorized his namesake school in the United States.