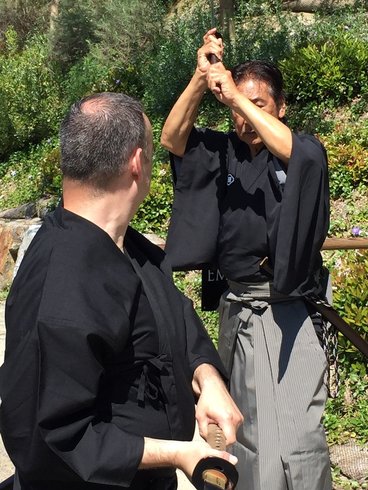 Jodan vs Wakigamae
Iaido is a form of Japanese swordsmanship that is based on responding to a threat when the sword is in the sheathed position. It differs from kendo and kenjutsu forms in several ways – it uses a real sword (or metal replica) and all action starts with the sword in its scabbard. Iaido is the practice of drawing the sword and striking an opponent or opponents from the draw, rather than facing them with a ready sword.

Iaido is a modern art based on old methods of combat. The modern art stresses repetition, the perfection of small motions and details, and the maintenance of a calm mind. The old method stressed killing the opponent before he killed you. Iaido practitioners should never forget what using a sword means and that the end goal is to kill the enemy as efficiently as possible. The purpose of a calm mind and attention to detail is not just to reach a higher state of being but to allow a more rapid and effective response to a threat, thereby getting the sharp end of the sword out of its sheath quickly and effectively.

Because an actual sword or metal replica is used for practice, direct sparring is not practical. Iaido focuses on individual training with waza, set techniques that address specific circumstances and how to react to them. There are partnered practices involving bokuto (wooden swords) to provide the training for what happens once two swords are drawn against one another.

Iaido is a twentieth-century term for an older art of swordsmanship. This older art is often referred to as iaijutsu or battojutsu – the killing art of drawing the sword. Some schools stress the "jutsu" or “batto” part of the name to indicate they concentrate on combat or cutting actual targets rather than performing waza. Indeed, iaido is not much different in actuality but most iaido schools focus on the waza part and not the drawing and cutting of targets part.